Sing Out, the final program of CAP UCLA’s Tune In Festival, is a day-long, international celebration of music and poetry with something for everyone. Day-time performers include Canadian duets Dan + Claudia Zanes and The Small Glories; Chilean folk-singer Nano Stern; L.A.’s Get Lit Players and the Ash Grove Alumni; Carla Canales’ Hear Her Song, a tribute to women in power from around the world; and the amazing Urban Voices Project, a troupe comprised of performers from L.A.’s Skid Row. The evening performances include the return Toshi Regaon and BIGLovely; L.A. activists and musicians, Quetzal; and esteemed L.A. violinist Vijay Gupta in collaboration with the legendary Kronos Quartet and the Los Angeles Poverty Department.

Grammy award-winning children’s performer Dan Zanes and Haitian-American music therapist/jazz vocalist Claudia Zanes have been making music with each other since the day they met in the fall of 2016. Inspired by their artful modern-day all-ages folk music and their commitment to accessibility, the Kennedy Center commissioned Claudia and Dan to create a theater piece for young audiences. Night Train 57: A Sensory Friendly Comic Folk Opera premiered in October 2017 and has been performed numerous times since. Their songbook, Dan Zanes’ House Party: A Family Roots Music Treasury, released in late 2018, has inspired conversations with parents, educators, music therapists and fellow musicians about how to work together to create a healthier, more musical (and ultimately) more festive society. While taking on these projects, Claudia and Dan have continued to bring their music to family shows, school workshops, community singalongs, and folk festivals throughout the U.S. and into Canada. They take their commitment to accessibility and inclusion with them wherever they go.

Roots powerhouse duo The Small Glories (Cara Luft & JD Edwards) is a musical tourde- force partnership born from the Canadian prairies. With a stage banter striking a unique balance between slapstick and sermon, these veteran singer/songwriters have a way of making rooms shrink, time disappear and audiences feel like they are right there on the stage with the band writing the songs, living the songs, performing the songs. The Small Glories repertoire features songs of love, loss, and the environment, delivered with soaring, interwoven vocals with various combinations of stomping clawhammer banjo, guitar and harmonica. However, a Small Glories performance is also about what happens in-between the songs. Luft, an original member of The Wailin’ Jennys whose parents were folksingers influenced by the great activist Pete Seeger, knows that sometimes a song is all you need to bring people together.

Political, outspoken and passionate, Chilean singer-songwriter and activist Nano Stern has created his own musical language — an otherworldly sound that blends the youthful exuberance of folk music mixed with years of classical and jazz training against the powerful force of traditional Chilean revolutionary songs. What has emerged is a brilliantly layered confluence of indigenous African, European and North and South American musical influences that reverberate with a soulfulness and originality unlike any other South American artist performing today.

Get Lit-Words Ignite fuses classic and spoken word poetry to increase teen literacy, cultivating enthusiastic learners emboldened to inspire social consciousness in diverse communities. The Get Lit Players and Poetic Ambassadors are an award-winning poetry troupe and the most watched poets on the internet. They have performed at the Lincoln Center, Kennedy Center, opened for John Legend at the Hollywood Bowl, have performed at the White House 3 times, and 27 Get Lit Poets recently penned and star in the feature film Summertime, directed by Carlos López Estrada, which premiered opening night at Sundance and will be seen in theaters spring 2021.

It has been over 47 years since Ed Pearl's legendary Ash Grove club closed after its third fire. This legendary club brought roots music out West and poured it into the culture, forever changing our musical landscape. Countless musicians who performed there and future musicians who learned their craft watching the masters work are still paying this musical heritage forward. Wendy Waldman, a critically acclaimed recording artist and songwriter in nearly every musical genre, is also one of the first distinguished female record producers. Joe Chambers, fabled American singer and songwriter for The Chambers Brothers, co-wrote and sang the legendary “Time Has Come Today.” Together with multi-instrumentalist Steven Moos, the Ash Grove Alumni band looks back to our roots and tunes in.

Conceived, produced and performed by Carla Canales, Hear Her Song is a musical celebration of distinguished female leaders from around the world, that commissions new songs inspired by their words from female composers and songwriters. By inviting female leaders, poets, songwriters and performers to gather and share, Hear Her Song reveals the unlimited power of women’s voices from a variety of diverse experiences and backgrounds. Past participants and honorees include former Secretary of State Hillary Clinton, Chief Theresa Kachindamoto, Supreme Court Justice Sonia Sotomayor, Activist Malala Yousafzai and composers Sheila Atim, Emily Estefan, Shaina Taub and Georgia Stitt.

Urban Voices Project’s outreach choir is comprised of performers from Los Angeles’ Skid Row neighborhood, many of whom have experienced or are experiencing the condition of homelessness. Throughout the year, they bring the healing power of music to audiences inside and outside of Skid Row, sharing their stories and successes of integrating music and community singing to combat the homelessness crisis. These performances in turn help shift the narrative and perception of homelessness in today’s society. The choir has been featured on numerous discussion panels, as well as performed at government inaugurations, galas and international community healthcare conferences. They have also enjoyed collaborations with celebrities including Dick Van Dyke, the Black Eyed Peas, Bootsy Collins and Joan Baez. As a non-profit organization, Urban Voices Project provides multiple music-oriented programs to underserved communities across Los Angeles County. Their work has found recognition on the front page of The Los Angeles Times, on NBC’s “Today Show” and “Dateline Special,” and was featured on National Public Radio’s “All Things Considered.”

Sunny War (born Sydney Lyndella Ward) is more than just an artist; she is a force of nature that is tough to pin down. What exactly is her style? Is she a blues or punk artist? The answer is yes and no. You can try to place Sunny in a few boxes, but doing so would be a major disservice to the young songstress. Yes, she may be a Robert Johnson with a shot of Bad Brains, but even this description falls short. The only way to really know Sunny is to immerse oneself in the music. Growing up in Los Angeles’ punk scene, Sunny was hopping trains from a tender age, riding free on the rails and living homeless on the streets. Her music has always been raw, and she refuses to shy away from a brutally open honesty about the rougher parts of her life. Now in her late twenties, with multiple international tours and critically acclaimed albums under her belt, Sunny War isn’t slowing down anytime soon.

Toshi Reagon is a one-woman celebration of all that’s dynamic, progressive and uplifting in American music. Since first taking to the stage at 17, the versatile singer-songwriter-guitarist has moved audiences with her big-hearted, hold-nothing-back approach to rock, blues, R&B, country, folk, spirituals and funk. The final live performance of CAP UCLA’s 19-20 season was Reagon’s highly acclaimed and sold-out opera interpretation of Octavia Butler’s prescient novel Parable of the Sower. Reagon will be joined by her band, BIGLovely.

Quetzal is an ensemble of LA musicians joined by the common goal of creating music that tells the social, cultural and political stories of people in struggle. The band’s music is rooted in the complex cultural currents of life in the barrio — its social activism and strong feminist stance as well as the East L.A. musical soundscape of musica ranchera, salsa, Chicano Rock, R&B, and international pop music. The group emerged from a particularly contentious time that included the 1992 Los Angeles uprising and the 1994 Proposition 187 campaign to deny medical and public services to undocumented immigrants and public education to undocumented children. These events spurred a powerful energy in which music and public art became platforms from which to voice marginalized people’s desires, opinions, and resistance to the conditions in which they found themselves.

An esteemed violinist and speaker, Vijay Gupta is a leading advocate for the power of music to foster social connection and create spaces of belonging. Gupta serves as the founder and artistic Director of Street Symphony, a non-profit organization providing musical engagement, dialogue and teaching artistry for homeless and incarcerated communities in Los Angeles. Vijay Gupta joined the Los Angeles Philharmonic at age 19, and served as a member of the first violin section through 2018. He has appeared as a guest concertmaster with the Los Angeles Opera and the Philharmonia Orchestra of London, and is an active recitalist, soloist and chamber musician. A gifted communicator, Gupta speaks nationally at universities and conferences on the intersection of music and community engagement, mental health, and social justice. Gupta is the recipient of numerous awards and accolades, including a 2018 MacArthur Fellowship.

Since 1973, San Francisco’s Kronos Quartet—David Harrington (violin), John Sherba (violin), Hank Dutt (viola), and Sunny Yang (cello)—has combined a spirit of fearless exploration with a commitment to continually reimagine the string quartet experience. In the process, Kronos has become one of the world’s most celebrated and influential ensembles, performing thousands of concerts, releasing more than 60 recordings, collaborating with an eclectic mix of composers and performers, and commissioning over 1000 works and arrangements for string quartet. The group has won over 40 awards, including two Grammys, the prestigious Polar Music and Avery Fisher Prizes and Edison Klassiek Oeuvreprijs. The nonprofit Kronos Performing Arts Association manages all aspects of Kronos’ work, including the commissioning of new works, concert tours and home season performances, education programs, and the annual Kronos Festival. In 2015, Kronos launched 50 for the Future: The Kronos Learning Repertoire, an education and legacy project that is commissioning—and distributing online for free—50 new works for string quartet composed by 25 women and 25 men. kronosquartet.org 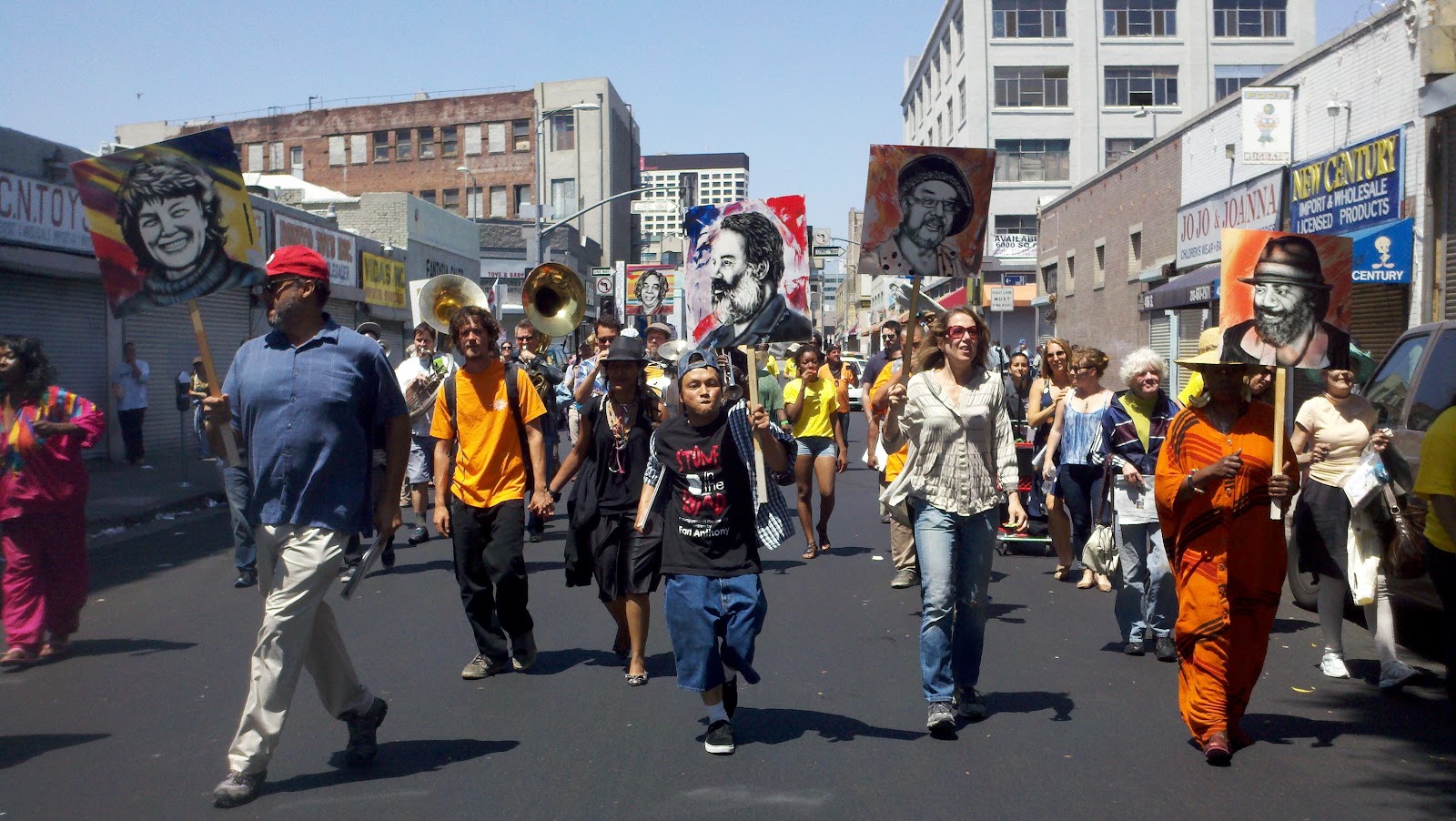 Founded in 1985, Los Angeles Poverty Department is made up of people who make art and live and work in Skid Row. LAPD’s performances and multidisciplinary artworks connect the experience of people living in poverty to the social forces that shape their lives and communities. LAPD’s works express the realities, hopes, dreams and rights of people in L.A.'s Skid Row. LAPD’s Walk the Talk performance / parade celebrates visionary initiatives and people who have stood up for and generated transformation in Skid Row. Walk the Talk begins with a community nominating process. Honorees are interviewed by LAPD’ers and we distill the interviews into scenes we perform along the parade route. Artist designed portraits of honorees are carried aloft and a brass band leads the parade. The interviews and performances become part of our Walk the Talk Archive and you will see a small sampling of it tonight. Have more: https://app.reduct.video/lapd/walk-the-talk/

Three ways to enjoy our programs and connect with us:

RELATED EVENTS
The Tune In Festival:
a convergence of music and poetry in a time of change
PERFORMANCE/MUSIC & POETRY

Need some help getting what we’re offering?
Get driving and parking tips, plus loads
of tactical information right here.
Get in touch with a human being.
Get deeper into all the upcoming performances,
by digging into our calendar.
Get more details on our artists, programs and
thought process via our blog.
Get to know our residency artists.